FutureFest: Visions Of The World Yet To Come 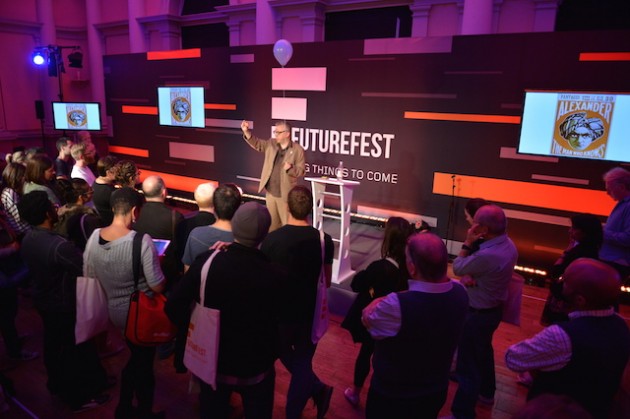 Get a glimpse of the world decades hence, as FutureFest returns to London on 14-15 March. This playful, innovative festival offers talks, visions, performances and interactive technology to explore the future of urban life.

The programme is already bristling with exciting speakers and demos, but here’s a flavour:

ROBOTS: A mainstay of visions of the future, robots are finally gaining the sophistication that could see them populating the home, streets and work place. The Emotive City installation lets visitors play with robots to manipulate the environment. Meanwhile, Michael Osborne of the University of Oxford talks about the impact of robots in the working world. Finally, have a conversation with the Blind Robot, who will gently explore your face with its hand.

MONEY: Money might be one of humanity’s most important inventions, so why is it so difficult to define? Economist Barry Eichengreen discusses past economic collapses and the implications of future financial reforms, while journalist John Lanchester explores the idea that we’re moving towards a whole new conception of the economy.

FOOD: At least in London, our diets are radically different from those our grandparents enjoyed. What will we pile on our plates a few decades from now? Will we even use plates? Or eat? Futurologist Dr Morgaine Gaye and chocolatier Paul A Young explore the sweetshop of the future and other foodie themes.

VIRTUAL REALITY: Technology has finally caught up with the concept of immersive simulation. Plug in to the Neurosis virtual thrill ride, created by Middlesex University, which uses neurological feedback to “transport, twist and twirl you through a psychedelic landscape”.

MUSIC: Ensemble BitterSuite and Tanya Auclair provide a multi-sensory set, in which you can taste, feel and smell the music. Meanwhile Adam Harper considers how technology might affect the future of music composition.

DRINK: The future of cocktails is safe in the hands of Mr Lyan (Ryan Chetiyawardana), creator of Hoxton’s much admired White Lyan bar.