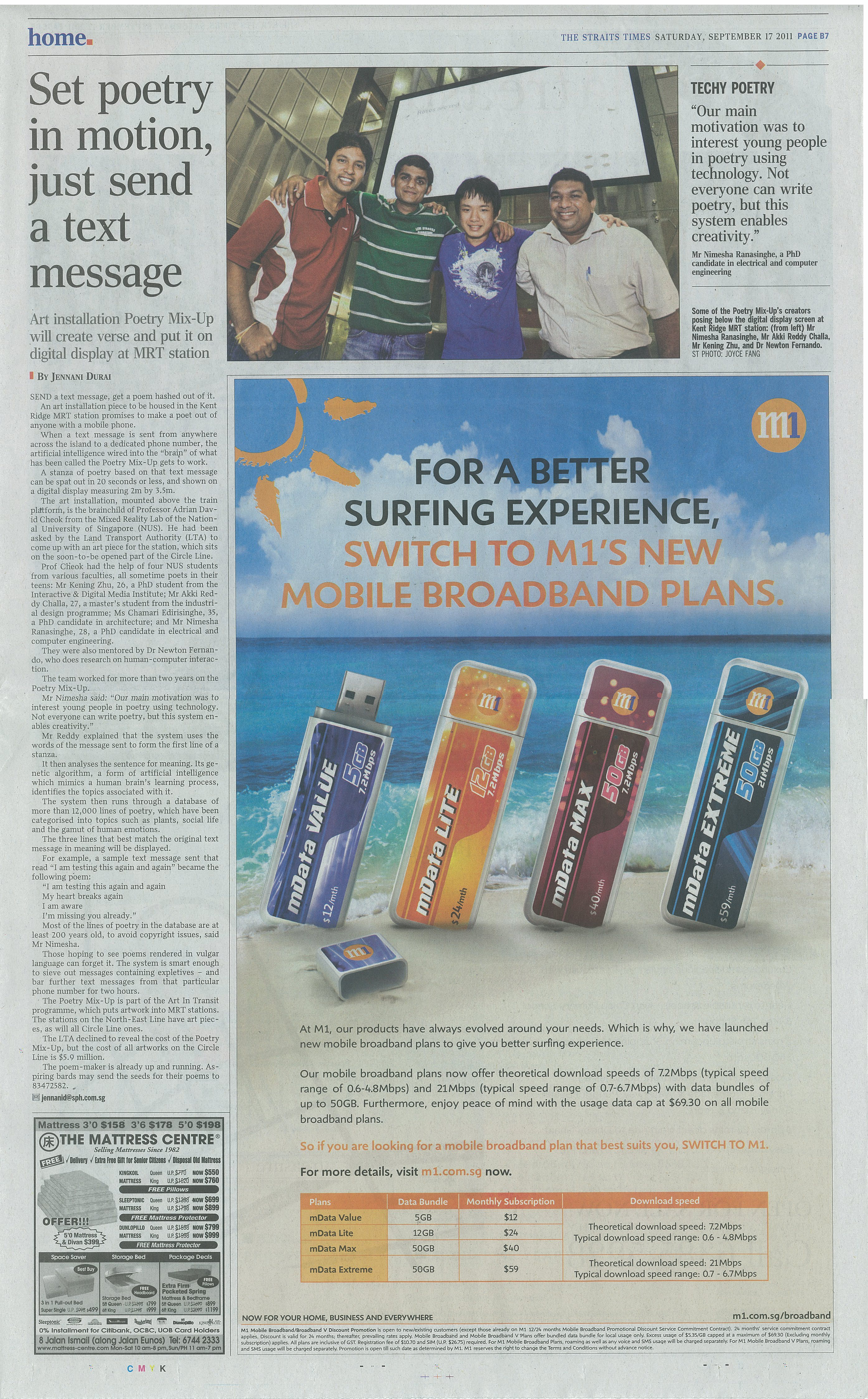 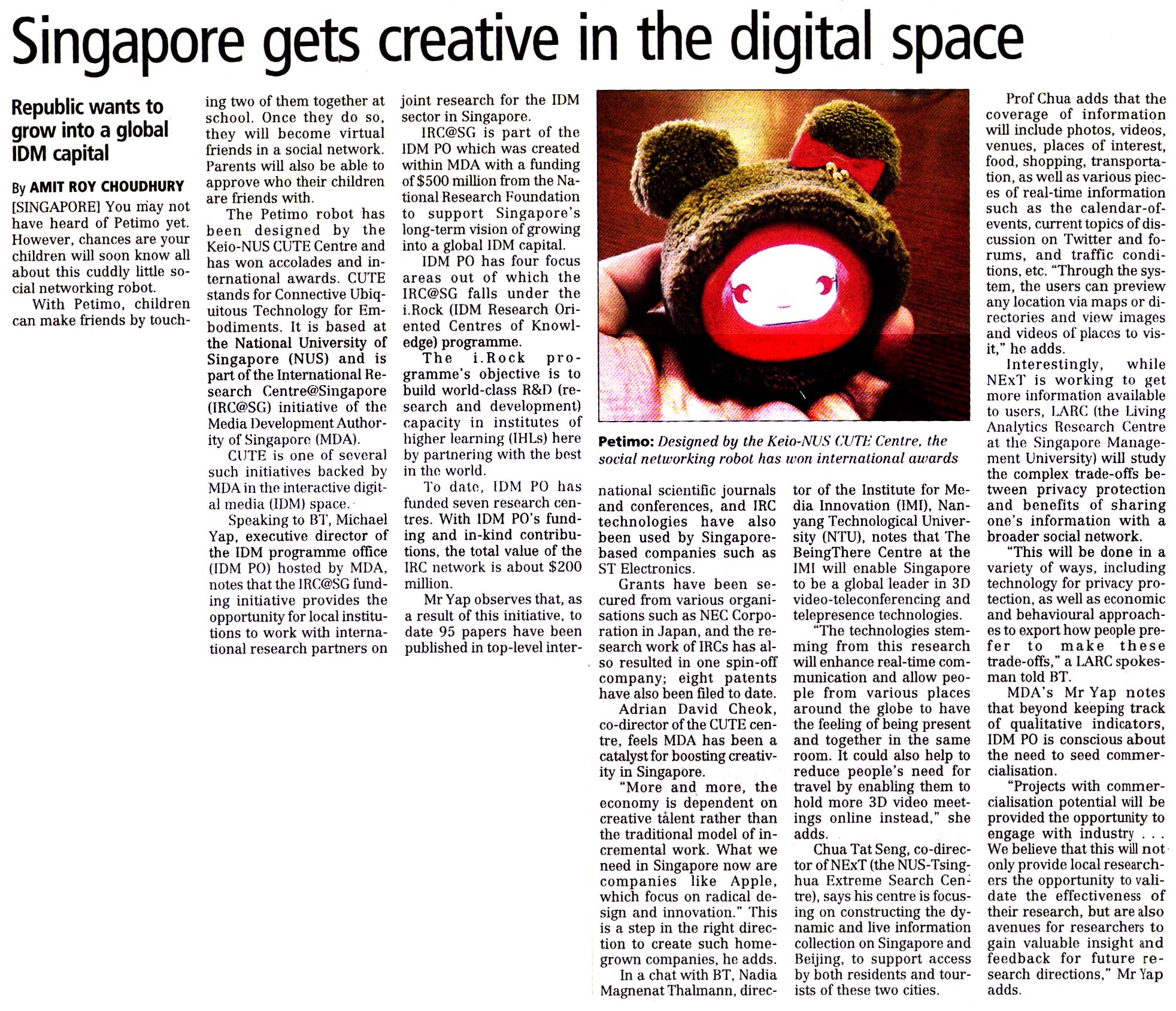 You may not have heard of Petimo yet.However, chances are your children will soon know all about this cuddly little social networking robot. 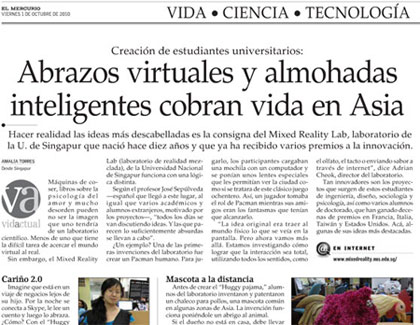 Sewing machines, books on the psychology of love and a lot of disorder may not be the image you have of a scientific laboratory. Less from the one who has the difficult task of bringing the virtual world to reality.

However, the Mixed Reality Lab at the National University of Singapore operates on a different logic.

According to Professor José Sepúlveda a Spanish researcher who came to this place, as several scholars and foreign students, motivated by the projects, “we spend all the time discussing ideas and only the craziest ones get to be implemented”.

An example? One of the first inventions from the laboratory was to create a human Pacman. To play, participants carried a backpack with a computer and used special glasses that allowed them to see the city as if it were the classic eighties game. Thus, a player takes the role of Pacman while his friends were the ghosts that had to reach it.

“The original idea was to bring to the physical world what we saw on the screen. But now we go further. We are investigating how to make the interaction complete, using the internet to send information to all the senses such as smell, touch, or taste”says Adrian Cheok, director of the laboratory.

So innovative are the projects that emerge from these students in engineering, design, sociology and psychology that have won dozens of awards in France, Italy, Taiwan and the United States. Here, some of their best ideas.

Imagine you are on a business trip away from your son. At night you connect through Skype, read him a story and then you hug him. How? With the “Huggy pajama, a jacket that using air pockets in the back, shoulders and chest, can can give you the sensation of receiving a hug, because it inflates in those areas.
To operate it, the person sending the hug pushes a button in a device connected to the internet. “This project does not replace the real hug, but it helps to feel closer. When we showed the prototype, I received email from a mother whose daugther was in intensive care in the hospital. She wrote to tell us how this could be useful for people like her” says Professor Cheok.

It is no secret that for many older adults is difficult to play the current computer games, which, however, for children are their favorite pastime. With that in mind, we created “Age Invaders”, a game composed of a large electronic board that is placed on the ground and lights indicating where one must move. Thanks to special slippers, the board knows where the players are, and will deliver different challenges, like chasing a few hearts that light up, or follow the direction of arrows. “This game can bring together different generations, while they exercise together. On the other hand, if the parents want to know what the children and granparents are doing, they can follow the match online online,” says José Sepúlveda.

To make a memorable meal, give your guests the latest generation of chopsticks. Here, through an electronic system, the chopsticks create music through the eating movement. The music is transmitted via Wi-Fi and can serve as the soundtrack of the meal. This invention also serves to teach children to use these tools through rhythm.

Before creating the “Huggy pajama,” lab students invented and patented a jacket for chickens, a common pet in parts of Asia. The invention works by putting a coat on the animal.
If the owner is not home, he should carry a plastic replica of the pet with a similar jacket (see photo) and connect it to the internet. So, the owner will be able to pet the chicken from a remote location. The project can also be used on dogs and cats.

“We want to create a sense of love for robots. So a student is studying what makes us human love: analyzing the movements, physical beauty, tone of voice and psychology,” says Professor José Sepúlveda. “In the future I think there will be robots that have a human couple. There is people that cannot be standed by anyone!” He says. For now, the “lovotics robot is just a prototype.

“PETIMO (pictured) was born with the idea that there is no safe social networking for children,” says Nimesha Ranasinghe, one of the students in charge of the project. Therefore, the objective of the toy is that, only kids first known in real life can join network in cyberspace. Thus, only when two Petimos approach, children become virtual friends. Then, the robot can let them chat and play them online. 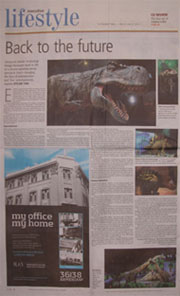 Back to the future: Adrian David Cheok interviewed for an article on animatronics,and Lovotics is commented upon”