This year you’ll receive an SMS with a difference as technology is introduced to transmit scents through your smartphone, says Josh McNorton 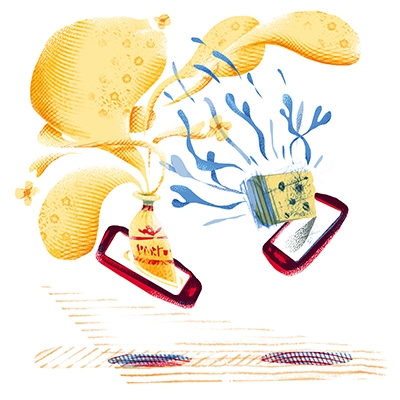 Imagine the next selfie you see posted is accompanied by the scent of perfume. The Instagram photo of your gourmet steak dinner comes with a whiff of buttery mashed potatoes. The olfactory overload of a Sunday afternoon visit to your local flower market can be texted to a friend a thousand miles away. In 2015, I predict that the ability to digitally transmit smells will hit the mainstream.

Digitising messages, images and sounds is so last century. In 2014, scientists in the UK, US and Japan have unveiled devices which can electronically simulate smells, providing a direct route to the limbic system of the brain, the part responsible for memory and provoking emotion.

The current leading device for digital smell transmission is a smartphone attachment called Scentee, developed in Japan and available there and in the US. Scentee can release a puff of coffee or bacon-scented mist to wake you up in the morning (unsurprisingly, this technology was used in a promotional campaign by the Oscar Mayer meat company called Wake Up and Smell the Bacon).

Scentee uses alcohol-based aroma cartridges which come in specific flavours and are housed inside a small plastic device that attaches to the headphone input of a smartphone. The signal is transmitted digitally to the device’s ultrasonic transducer, which then releases the scent as a puff of vapour.

Mugaritz, one of the world’s top-ranked restaurants, has paired Scentee with its mobile app to virtually evoke the aromas of some of its signature dishes. The technology behind Scentee opens the door to a new form of digital escapism. In the case of Mugaritz, users can experience the bouquets of a Michelin-star meal from a restaurant in northern Spain without leaving the UK (or spending the money to eat there).

Adrian Cheok, Professor of Pervasive Computing at City University London, developed the technology behind Scentee and is currently working on a device that doesn’t rely on chemicals or pre-set cartridges. Instead, the latest technology sends a magnetic signal to a mouthguard which sits in the back of the throat and stimulates the olfactory bulb.

If an electronic mouthguard isn’t to your taste, scientists at Harvard have developed the oPhone, a pipe-shaped device made for receiving scent messages (called oNotes) triggered by an iPhone app called oSnap. The app allows you to take a photo and choose one of thousands of aromas to tag it with before sending. In the very near future, we will use devices like the oPhone to take a virtual tour of Marrakech, absorbing all the sounds, sights and smells of the souks and market square.

Professor Cheok and a team of City University researchers have also been studying the effect of synthetic smells, sent via the Internet, on emotions. The implications for marketing are huge. Could the digital scent of salt water and sea breeze on a travel website increase your likelihood of booking a beach holiday?

It’s been half a century since the concept was first introduced to unimpressed cinema audiences and we’ve since voted it one of the worst inventions of all time. But while we’ve turned our noses up at past attempts, I believe 2015 is the year smellovision will finally lose its stink.

Adrian Cheok will be presenting his latest prototypes and projects at FutureFest, Nesta’s two-day festival of innovation on 14-15 March 2015 in London.