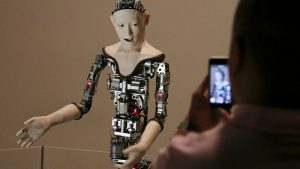 At the Second International Congress on Love and Sex with Robots (a real thing) Swiss researcher Oliver Bendel cautioned an audience of prospective robot-fuckers that “If the machine over-exerts the human, it reduces the possibility of human sex.”

In other words, sex bots are coming. And one way or another they’re going to fuck us to death.

Bendel noted that robots, unlike humans, don’t tire out. If issues of robot ethics aren’t addressed before these sentient Fleshlights hit the market, they could either screw us to the point of physical exhaustion, or be so much better at sex than real people that humanity might stop boning entirely.

Would a roll in the hay with C3PO really be that much better than locking legs with a biological biped? Consider how easily present-day tech companies soak up user data. Now apply that level of intimate knowledge to an intimate gear-grinding liaison. Such a bangbot might, as Bendel notes, be capable of using that information to seduce humans.

Given the present state of teledildonics (the unfortunately named industry of internet-connected sex toys) cybergigolos are a long way off. Although if human stupidity is any indicator, we won’t bother answering the questions around their ethical construction until it’s already too late. When alien visitors finally reach Earth, they will find only a barren wasteland of broken down robot prostitutes and the neglected remains of the dumb, fleshy creatures they were too good at serving.