Dispatches from the Second International Congress on Love and Sex with Robots. 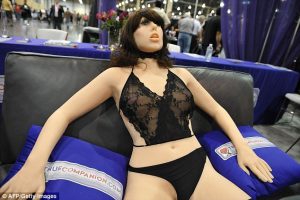 Right now, the Second International Congress on Love and Sex with Robots (yes) is wrapping up in London. Over two days, experts in the field of sexual robotics discussed a range of technological, societal, and ethical dilemmas presented by the changing sexual landscape. Basically, sex-bots are going to be a thing, and humanity is going to have to deal with it—or even embrace it, à la Westworld.

But that might tire humanity out. A Swiss researcher, Oliver Bendel, warned, “If the machine over-exerts the human, it reduces the possibility of human sex,” according to the Register. In other words, flesh and bone (and desire) literally cannot keep up with machine.

Other questions raised at the Congress included: Should robots be able to “entice” people? How much data will they mine from humans to improve the sex? Should they have to reveal that they are robots? Seeing as sex-bots still look about as human as blow-up dolls, that last question won’t need an answer for a while.