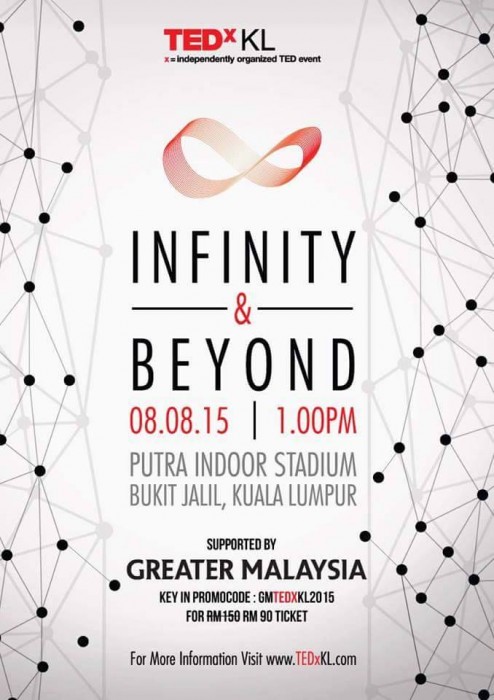 A piece by April Lin and Ezri L. – Writers at Greater Malaysia

TEDxKL will be held on 8 August 2015 at Putra Indoor Stadium, Bukit Jalil, Kuala Lumpur with the Theme: Infinity ∞ Beyond.

TED stands for Technology, Entertainment and Design, it is a platform for spreading ideas and promoting discourse. This year, TEDxKL has invited an array of unique speakers and here is a little scoop on the presenters at the event.

Why you should listen

In case you’re wondering what pervasive computing is, it’s the concept of inserting microprocessors into everyday objects to communicate information. Think Iron Man and the way he can make gestures to use the computer instead of a standard mouse and keyboard.

Interested? You should be! Prof. Adrian Cheok, who is currently the Director of the Mixed Reality Lab based in Singapore, has been researching on integrating mixed reality, human-computer interfaces, and embedded systems amongst other things.

An Editor/Associate Editor of many academic journals in the field, Prof Adrian Cheok has been conferred a myriad of awards including the Agency for Science, Technology and Research (ASTAR) Young Scientist of the Year Award and the Singapore Computer Society Young Professional of the Year Award. A receiver of the prized Hitachi Fellowship, he was also awarded Microsoft Research Award for Gaming and Graphics.

The man with the electric lollipop How can successful innovation be brought about by basic research? Adrian David Cheok has achieved this, and made the Internet more sensory -Roland Berger Strategy Consultants