A recent competition run by an American bacon manufacturer to win an iPhone-connecting device that emits the smell of rashers with the wake-up alarm could be viewed as a cruel trick on the senses. But it proved popular with thousands of entrants and marked a breakthrough for the London-based academic behind the technology.

Adrian Cheok, professor of pervasive computing at City University London, designed the gadget, which attached to the iPhone via its headphone jack and released a puff of bacon-scented mist, as well as the sound of frying, in a promotion for the Oscar Mayer meat company dubbed Wake Up and Smell the Bacon.

Cheok’s device may have been harnessed to an advertising gimmick, but the Australian scientist has an ambitious plan: to transmit taste and smell electronically so that when someone looks at a picture of a rose on a phone they are able to smell it, or experience the aroma of a Spanish paella when looking at snaps from their holiday on the Costa Brava.

Cheok’s technology is also behind a device available in Japan called Scentee, which is a small balloon-shaped smartphone attachment that emits a smell when programmed to do so.

The £12 device has a motor that vibrates and emits a mist containing the concentrated fluid essence of rose, coffee, lavender or rosemary, among others. It can be programmed to give out a hazy floral puff when someone’s partner contacts them. Smells are contained in separate attachments, which are sold individually and contain between 200 and 300 bursts.

This first step to bringing more senses to the digital world follows a career in which 42-year-old Cheok has worked on augmented reality systems, where computers enhance a user’s experience.

One of his creations was a virtual reality Pac-Man challenge, where the user would put on a specially designed suit and headset to roam the streets looking for “cookies”.

Cheok said: “In the real world we don’t just sense the world with our eyes, we have five senses.

“So with virtual reality, we can see a virtual rose on the table but we can’t touch it, we can’t pick it up, we can’t smell it, we can’t taste it. That is when I started to think that we needed to develop a new type of augmented reality for all of the five senses.”

During early experiments he worked with elderly people, developing applications to avoid loneliness so that relatives could cook together via the internet while separated.

Cooking utensils were augmented to include haptic technology – devices that recreate the sense of touch. This allowed users to “feel” when they were doing their tasks and used 3D food printers to replicate meals.

“Right now when we think about computing, we don’t think that we can have taste and smell experiences. But actually taste and smell are the only two senses which are connected to the limbic system of the brain, which is also responsible for the emotion and memory,” said Cheok.

“It is actually true that a smell can subconsciously change your mood, so they are very important senses that you can bring to the internet, especially when you are talking about emotional communication [between] for example the elderly and grandchildren,” he added.

The main problem with transmitting taste and smell was clear. While light and sound can be digitised, taste and smell are chemically based and “you can’t send chemicals through wires,” he said.

The initial development was the Scentee, which was launched in Japan and emits only single smells. This is just a first step, however, and other more ambitious projects are in progress.

A prototype device has been made that stimulates sweet, sour, salty and bitter tastes when the prongs are pressed on a person’s tongue.

Cheok is also working with neuroscientists to make a magnetic coil to go in the back of the mouth to indirectly stimulate the olfactory bulb, a key part of the brain responsible for smell. Using a device like a mouthguard, he said, this could produce artificial smell perception in the brain.

“Once you have digitised this signal, you can transmit through the internet. You can transmit to your mobile phone. It becomes a signal which does not require the transmission of chemicals,” he said.

“My research goal is to go beyond the chemicals. We want to make versions of this where you don’t need this digital device so you basically just have the electronics and then the electronics could be just embedded into your mobile phone or the back of your mouth and then making infinite kinds of smell combinations once you can control the signals.”

The advent of wearable technologies that interact with the body, such as health monitoring devices, will result in people accepting such devices in coming years, he said.

“[Now] you still can’t feel the experience of what it is like to be in this place in London or if we share a meal together or go to the pub together.

“I believe we will go from the information age, which is where we are now, to the age of experience.”

Also in development is a ring to be worn on the finger, which, using haptic (tactile) technologies, can be squeezed to send a sensation to a corresponding ring – effectively creating a greeting between partners.

“Once we make these devices, the virtual world will become almost as physical as our reality,” said Cheok.

While Heston Blumenthal’s Fat Duck restaurant is known for implanting an iPod into shells so that diners can hear the sound of the sea during one of their fish courses, Spain’s Mugaritz – also ranked among the best eateries in the world – went one step further. The head chef, Andoni Luis Aduriz, used a Scentee to simulate one of his dishes so that when someone virtually crushes herbs and spices using his restaurant’s smartphone app, aromas of black pepper, sesame and saffron are emitted from the device. 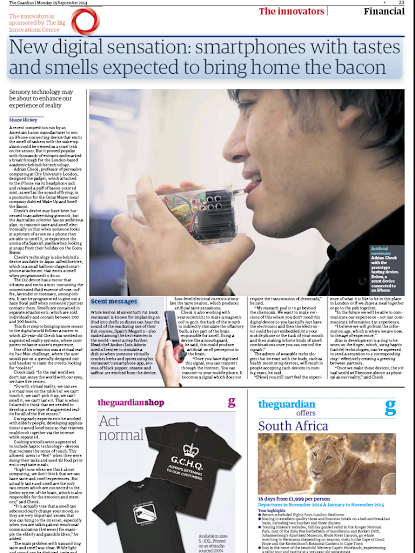