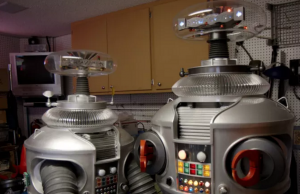 After this bullshit of a year, what’s next? According to Swiss researcher Oliver Bendel, a very real possibility for anyone hoping to fuck some robots is death by way of said fucking.

The Second International Congress on Love and Sex With Robots, which Gizmodoreported Monday is “a real thing,” saw Bendel advising robot coitus scholars on the dangers of not implementing some serious sex bot training before the little fuckers hit the market. “If the machine over-exerts the human, it reduces the possibility of human sex,” Bendel said.

But there’s more to the dangers of robot sex, as explained by the Register:

“The proliferation of sex-robots—presumably able to incorporate data and feedback to constantly up their game—could have a physical effect on their human lovers, and beyond, he warned. Human sexuality has certain ‘physical limits’ he said, particularly in the male of the species. Robots, on the other hand, were potentially tireless. This could have a knock-on effect for a robot’s human partner, and indeed the partner’s partner.”

Additional concerns raised during the conference included whether the bot should be “available” to a human at all times and whether the bot should be required to reveal themselves as, you know, a robot. Given that sex with human beings is generally considered a wholly underwhelming experience, the excitement surrounding the early stages of the robot-fucking industry is understandable. But getting robo-fucked to the point of exhaustion, maybe even death?

Until then, maybe invest in some affordable hologram tech for your phone and/or tablet so you can start participating in holographic cam shows.