Researchers at City University London, are in talks with the finance sector about using wearable technology to provide trading executives with real-time data 24 hours a day.

The catering and healthcare industries are also interested in using pervasive computing currently in development. 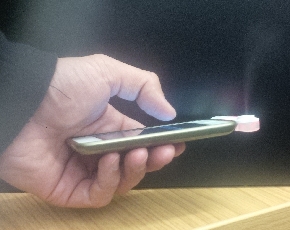 Adrian David Cheok, professor of pervasive computing at the university, said people are currently fully focused on screens for information and there is a limit to what can be absorbed. By sending messages through touch and smell via the mobile internet rather than just audio-visual data, humans can consume more information.

With developments such as big data technology and 4G there is more information available 24/7, but a limited ability to absorb it.

Cheok and his team have developed a ring that can receive a message over the internet. This ring can be connected to an application that monitors big data. If there are changes in things such as stock prices, a message could be sent to the ring through the sense of touch.

“[A finance firm] is looking to use the ring for real-time data for finance professionals because you can’t be in front of your terminal 24 hours a day. But there are certain stocks and indicators they have to always monitor,” said Cheok. “By having something very personal on your body, like wearable technology, 24 hours a day they can, for example, get information about whether a stock is going up or down.

“The thing is we have access to infinite data, but to effectively interact with that data and in the physical world we need to use all of our sense for communication. Basically right now we’re using all of our concentration on screens so there is a limit to how much we can absorb and we can’t always be looking at a screen, you have to do things with your body.”

He said the research team is also talking to a Michelin star restaurant Mugaritz in San Sebastian, Spain, about supporting its advertising.

“The restaurant can fit only a limited number of people in every night, and they want to expand their customer base. How do they do that? They already have a website with photos, but people can’t understand the experience. We’re working with them to make an app, not only will you see the food, you’ll be able to smell it as well. This virtual sense of presence experience so advertising and marketing can benefit,” he said.

“It’s a good example of where audio visual data isn’t enough, if you want have experience of food, then taste and smell are essential, we need to bring in all of the senses, to communicate through the internet, so this is a real-world example of how this could be used,” added Cheok.

Smell is connected to the limbic system in the brain, it can directly trigger memory

The healthcare industry is also looking at technologies being developed by the team. For example, smells can be automatically triggered in the room of a patient as a reminder to take medication.

“Smell is connected to the limbic system in the brain, it can directly trigger memory. We’re discussing with a group working with dementia patients and the biggest problem is they forget their medication and because smell directly affects memory and emotions it can be used to remind patients to take medication,” he said.

Cheok demonstrated a smell being transmitted over the internet to a mobile phone (pictured, above). This uses a chemical pack attached to a phone and a message will trigger a smell. About 10,000 of these have already been sold in Japan and the City University team expects to bring them to the UK soon.

Other innovations in development include a “hugging pyjama” that can be used by parents to hug children when they are not around. The concept could have applications in the care industry. A person hugs a jacket and it sends a message to the jacket being worn by the recipient who feels the hug.