A truly wonderful gadget is coming to the marketplace. It makes boring diet food taste like delicious junk food.

When people go on a diet they have great difficulty sticking to it in the long run. That is because some of the scrumptious foods that are banned by the diet remain as tantalizing temptations.

The brain’s appetite centers face burnout and soon the person is dining on all that sugary, salty, fat-filled food and the diet has gone with the wind. Yet there is good news for dieters. They can have their cake and eat it too (no pun intended).

A gizmo termed Taste Buddy can do the trick. It apparently fools the taste buds into believing that bland diet food is delicious junk food, according to DailyMail. The prototype for the device has already been made. It is introduced into the mouth.

This gadget then emits electrical and thermal signals that manipulate the taste buds in such a manner that they are tricked into believing that boring is interesting in matters having to do with food.

The prototype is meant to imitate sweet and salty tastes right now. There lies some more tweaking in the future device that could radically alter the taste of your diet.

You can think of this device as one that alters the taste of bland tofu to resemble juicy beef steak. Or for that matter, it can make broccoli taste like chocolate.

It basically started out as a side interest in engineering but soon the researchers saw that the device held potential and they just proceeded to delve into the complexities of this bionic device of sorts.

This contraption can save the lives of people in the long run. When people can take the most spartan of diets and feel like they are gourmets at a banquet, the device’s makers will have been redeemed.

Take the case of many children who find vegetables to be a yucky food. To make stuff like broccoli taste like chocolate will allow these young ones to live in a healthier manner yet feel like they are eating their favorite treats.

This would indeed be the ideal setup for them. The current form of the Taste Buddy consists of a two centimeters wide tab that lies on the tongue and is connected to a large processor.

It can trigger sweet and salty tastes in the tongue of the person that is using it. Soon a science fair will take place where the Taste Buddy will be on display and ordinary people will get to try it for real. 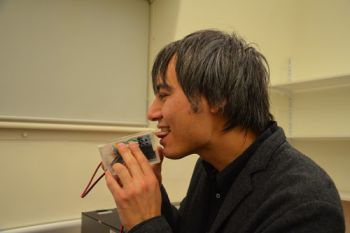 A team of scientists and engineers, led by City’s Professor of Pervasive Computing and Director of the Imagineering Institute, Professor Adrian Cheok has created the ‘Taste Buddy’,

The device is placed in the mouth and emits a low-level electrical current that stimulates taste buds, imitating sweet and salty tastes and could enable people to lead healthier lifestyles.

In its simplest form, the ‘Taste Buddy’ can be used to enhance specific tastes, such as making foods sweeter or saltier based on personal preference. 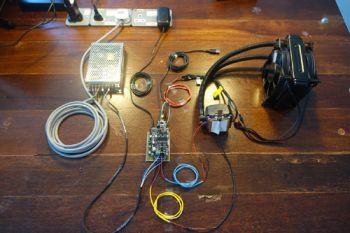 Professor Cheok predicts that the ‘Taste Buddy’ could eventually be powerful enough to completely transform the taste of a specific food, allowing people to taste something they enjoy, whilst eating something healthier (for example, making a piece of tofu taste like steak).

The device, which is predicted to be available on the high street within the next 20 years, could eventually be engineered to fit within everyday utensils such as cutlery, cups and cans.

“What started out as a fun engineering experiment has now led to something much more exciting with the potential to have a positive social impact. The ‘Taste Buddy’ is a great example of skilled science and engineering working hand in hand with a relevant and fun impact. The Taste Buddy could eventually help save lives, by allowing people to switch to healthier food choices.”

“Many children hate the taste of vegetables. So I knew that when I became an engineer, I wanted to make a device that could allow children to eat vegetables that taste like chocolate!”

Definition: Prototype
A prototype is an original or first model of something from which other forms are copied or developed.

Special recognition for Professor Adrian Cheok, Professor of Pervasive Computing in the Department of Computer Science. 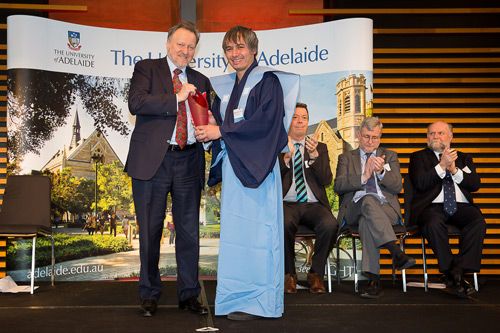 The Award is “in recognition of alumni who have enhanced the reputation of the University through outstanding service to the community or who have made an outstanding contribution in their chosen fields.”

The Awards were established in 1991 by the trustees of the former Alumni Association and are now administered by the Alumni Office.

Professor Cheok obtained a First Class Honours Bachelor of Engineering degree in 1994 and completed his PhD in Engineering in 1999. He has been a pioneer in mixed reality and multisensory communication and his innovation and leadership has been recognised internationally through multiple awards.

He was presented with his Award by Professor Warren Bebbington, Vice-Chancellor and President of the University of Adelaide.

Professor Cheok joined City, University of London as a Professor of Pervasive Computing in 2013. He is also the Director of the Imagineering Institute in Iskandar, Malaysia.

Some of his pioneering works in mixed reality include innovative and interactive games such as ‘3dlive’, ‘Human Pacman’ and ‘Huggy Pajama’. Professor Cheok is also the inventor of the world’s first electric and thermal taste machine, which produces virtual tastes with electric current and thermal energy.

Definition: Mixed RealityMixed reality (MR), sometimes referred to as hybrid reality, is the merging of real and virtual worlds to produce new environments and visualizations where physical and digital objects co-exist and interact in real time. Mixed reality takes place not only in the physical world or the virtual world, but is a mix of reality and virtual reality, encompassing both augmented reality and augmented virtuality

The International Congress on Love and Sex with Robots – two days of talks and workshops exploring the human relationship with artificial partners – will be held at Goldsmiths, University of London from 19-20 December 2016.

Within the fields of Human-Computer Interaction and Human-Robot Interaction, we have recently seen a strong upsurge of interest in the more personal aspects of human relationships with developing technology.

A growing interest in the subject is apparent among the general public, as evidenced by an increase in coverage in the print media, TV documentaries and feature films, but also within the academic community.

In September 2015 a short article titled ‘In Defence of Sex Robots’ by Goldsmiths computing lecturer Dr Kate Devlin was published by The Conversation and has gone on to reach more than half a million readers in several languages. It is one of the website’s all-time most popular essays.

Dr Devlin is organising the conference at Goldsmiths to bring together a community of academics, industry professionals and anyone else interested in sex robots, to present and discuss innovative new work and research.

Sessions are planned on humanoid robots, robot emotions and personalities, teledildonics, intelligent electronic sex hardware, entertainment robots and much more. Presentations will take a range of approaches, from the psychological to the sociological and philosophical.

Dr Devlin argues that gender stereotypes and sexual objectification have long been prevalent themes in existing research and popular representations of sex and robots, and this is a narrative that must be challenged.

“Our research aims to carve a new narrative, moving away from sex robots purely defined as machines used as sex objects, as substitutes for human partners, made by men, for men,” she explains.

A machine is a blank slate – it is what we make of it. Why should a sex robot be binary? What about the potential for therapy? It’s time for new approaches to artificial sexuality.

“Cutting edge research in technology and ethics is vital if we want to reframe ideas about the human-tech relationship.”

The International Congress on Love and Sex with Robots was previously banned in Malaysia.

Research presented at the Congress will be reviewed and compiled into a special issue of the journal Computer Science.

A full line-up of speakers will be confirmed in October.

Registration and further information is available at loveandsexwithrobots.org

A device that tricks the tongue could one day turn the most unappetising healthy food into a delicious treat.

When placed in the mouth, the Taste Buddy emits thermal and electric signals that stimulate the taste buds.

The prototype is restricted to imitating sweet or salty tastes, but its inventors say it has the potential to change our diets by transforming bland tofu into juicy steak or conjuring up chocolate broccoli.

Adrian Cheok from City, University of London, who led the team of scientists and engineers that created the device, said: “What started out as a fun engineering experiment has… Continue reading