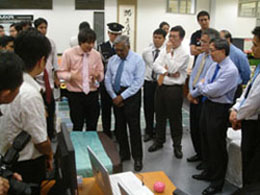 The Keio-NUS CUTE Center was officially opened by His Excellency President SR Nathan on 12th October, 2009. The event was attended by distinguished invitees from the National Research Foundation (NRF), the Media Development Authority (MDA), the National University of Singapore (NUS), the Keio University and several other government and private sector organizations.

HE President declared open the center by cutting the traditional ribbon as well as launching a “digital ribbon cutting” followed by the unveiling of the plaque. The Co-Director of the Center, Prof. Adrian Cheok, showed visitors the cutting edge research carried out in the Center. Introducing its research, Prof. Cheok stated that “our research tries to solve important problems in society”. The demos included research carried out in the Center using different media for communicating between Children and Families using senses hitherto unexplored in such communication. Some of the demos that caught the attention of the distinguished gathering included AmbiKraf-color changing fabrics, Petimo-Safe social networking tool for children and Huggy Pajama – a remote hugging device for families. The visitors were highly appreciative of the achievements of the Center in a very short period of its existence and congratulated the Center director and its staff in progress made in making Singapore a global hub in Interactive and Digital Media research. Several guests congratulated the Center Co-Directors Prof. Cheok and Prof. Masa Inakage of Keio University on the initiative taken to share the resources and expertise of two highly acclaimed academic institutes in coming together for collaborative research. Research staff and students of the center were highly thrilled to demonstrate their research and the global award-winning results obtained to such a distinguished gathering and are highly motivated by the interest shown by such a distinguished group of visitors.