After a very difficult process of restoration, the Baba house at Neil Road (Singapore) will open the next 12th of September. For this event 6 local poets have written poems based on the Peranakan culture. According to each thematic, 6 compositions have been designed for a live performance. The style that has been used corresponds to an Acusmatic and Concrete Music design, based on occidental and oriental music styles: Piano, ErHu, According, among other sounding resources. Afterwards a real time processing will modify the main compositions taking the speech parameters of each poet recitation: pitch, dynamic amplitude, range, syllabic speech, etc…

Peranakan Culture
Baba culture is truly a unique creation of Southeast Asia. It is the culture of an old immigrant Chinese community that settled in What was known as the Straits Settlements: Malacca, Penang and Singapore. The community can trace its presence in Malacca to at least the 17th century.

Throughout the centuries, Baba culture has managed to maintain many ancient Chinese traditions while adopting many customs of the land they settled in and their colonial rulers. You can find in Baba culture traces of Portuguese, Dutch, British, Malay and Indonesian influences.

Music
The Babas were masters of the popular 19th century Malay singing form — dondang sayang. They were also one of the first Chinese communities to learn Western classical music as well as popular genres such as jazz and swing. Chinese music was restricted to weddings when the seroni, a wind instrument, was played.

The incoming signal is sending to fiddle~ object, witch estimates the pitch and amplitude of an incoming sound, both continuously and as a streem of discrete “note” events. Fiddle’s creation arguments specify an analysis window size, the maximum polyphony (i.e., the number of simultaneous “pitches” to try the find), the number of peaks in the spectrum to consider, and the number of peaks, if any, to output “raw”. The outlets give discrete pitch (a number), detected attacks in the amplitude envelope (a bang), one or more voices of continuous pitch and amplitude, overall amplitude, and optionally a sequence of messages with the peaks.

The outing values are connected to sync~ synchronize MSP with MIDI, for obtaining numeric values of the speech signal. When fiddle find an unrecognizable incoming signal outputs a “bang” (no value).
The out coming values from sync~ are sent to Mean. This calculates the average of all the numbers it has received and selects the suitable messages are going to be used.

These three parameters will design, as a real time user, the main work composed for each poem. 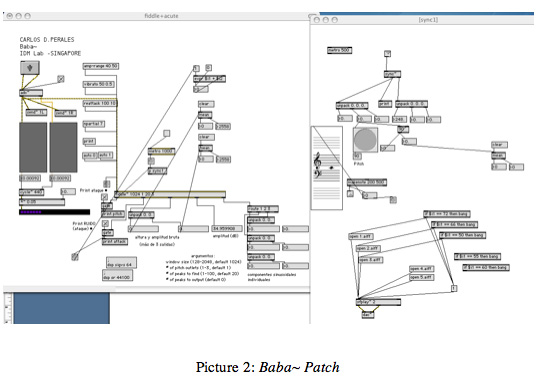