Objects and Desire: The Passage
By Choy Ka Fai and Khoo Eng Tat

In conjunction with and pointing forward to the launch of NUS Baba House in late 2007, Objects & Desire is a conceptual project challenging eight invited talents to present their works inspired by The Each piece is conceptual in its design, delivery and presentation. Each aims to tantalize our senses in appreciating the creativity and collaborative efforts of young artistic talents from Australia, Germany, Malaysia, Mexico, Singapore and USA. 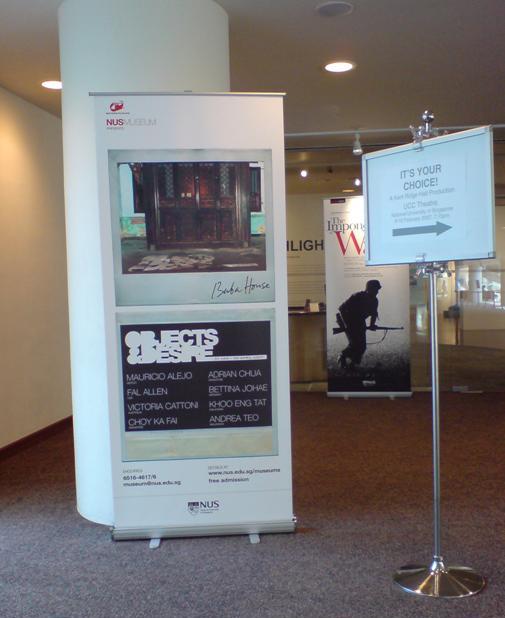 Concept
The Passage is an interactive space where viewers can immerse into a landscape of textured-sounds inspired by the traditional Peranakan ceremonial music perform during important rite-of-passage like weddings and funerals.
“The Passage” suggests a journey back to the traditional colorful ceremonial music, re-living certain moments in time , yet it is also the passage of time which made it a diminishing art-form in our contemporary life.
Essentially, this installation is also a physical passage way/space for interaction and exploration whereby a motion-based tracking system will allow the viewer to discovering the different layers of sound-scapes and led light patterns with their physical movement.

Interactive Design
The Passage is Khoo and Choy’s first collaborative effort which uses the knowledge and strength of each other to design a programme that triggers emotions within the time-space of reality and virtual, based on the research of interactive medium.
The Passage uses LEDs (light-emitting diodes – a diode being a type of semiconductor) to trace the photographs of Peranakan* wedding couples. Each photographs tracks a sound derived from remixing and recomposing the soulful wedding seroni music. The sequence and mixing of different layers of sound tracks are composed in different combinations and possibilities, anticipating the audience’s interactions. Sensing the audience’s movement will trigger and signal the sound and images within the space. Their collaboration allows the sounds to be triggered as a cohesive experimental sound work exploring performance without a physical performer, using sound, lights, computer programming and other sensory devices to create an environment of stimulus for the imagination. The interactive aspect of the space encourages the audience to look and listen and to look at each other, creating a sense of theatrical space in the walkway of NX. The audience as the community is here to engage, experience and be seen.
* Peranakan – a unique vibrant culture found in the Southeast Asian Region, mainly Indonesia, Malaysia and Singapore. It is a culture that encompasses the best of old ancient Malay, Chinese and European influences and absorbs the best of other cultures to form a cohesive and united identity.