“Media Me” is a media interactive art work which comments on the bidirectional relationship between people and the media through the use of a realtime video mosaic. The elements of the video mosaic could be personal, cultural, historical, and educational. This research can be considered as a combination of creativity, art, and digital entertainment as well as an extension of personal media broadcasting. It comments on the growing trend of personal broadcasting and social media.

Television has been the mass media for broadcasting media content for a long time. However, developments in broadband internet and social networks have made it possible for individuals to use their own personal media as broadcast media. For example, “YouTube” allows individuals to submit personal videos for public viewing. From the previous concept of a few broadcast channels, now we have millions of channels broadcast by individuals. This has led Time Magazine to announce the person of the year in 2006 as “you”, to highlight the revolution in personal media that has developed.

As an artistic reflection on new personal media, Media Me is an interactive video installation that displays a captured image of a person as a video mosaic made of hundreds of videos. We literally turn the body into videos, which artistically represent the revolution in personal media. Videos are continuously arranged in realtime to form a mosaic representation of the background to provide meaningful contents, such as cultural and historical media. When no image is captured by the system, Media Me activates and reflects the media itself by creating a mosaic of cultural and historical content. 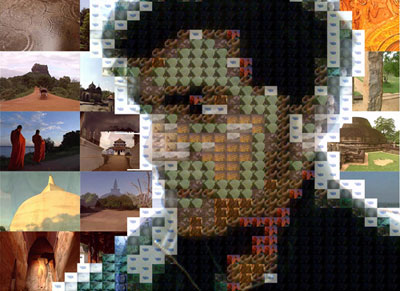 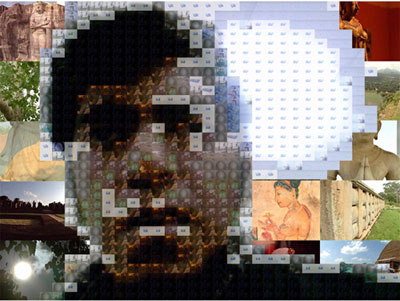 Figure 1: Mosaic created by the system