An invention for mixed reality family entertainment has been developed by researchers in Singapore. Mixed reality technology, in which computer graphics are superimposed on the real world, enables traditional “magic cubes” to have three-dimensional fantasy for family entertainment. It has just been filed in 5 separate US Patents

A standard magic cube is made up of a handful of small wooden or plastic cubes connected at various surfaces or edges. These can be unfolded or combined in many ways to reveal a sequence of puzzles or different pictures. Now Professor Adrian David Cheok and research fellow ZhiYing Zhou at the Mixed Reality Lab at the National University have updated this kids’ toy and endued it with computer graphical magic. 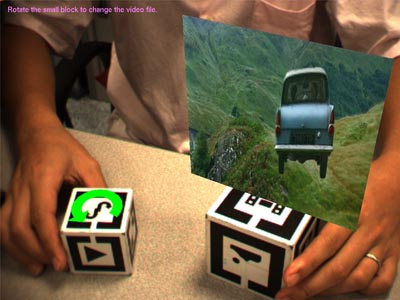 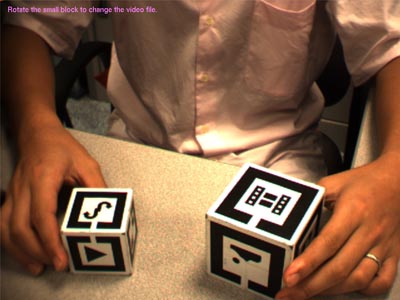 Their first attempt is to let the “magic cube” tell the Old Testament story of Noah’s ark. The computer can tell the story of different stages which the user reveals by unfolding the cube. To watch the 3D story scenes, the user wears a head mounted display with a small camera attached to the front which is connected to software and is able to recognizes the symbols printed on different stages. At each stage, the computer uses the symbols as its cue to run a segment of audio and animated three-dimensional video, which tells part of the Noah’s ark story. To facilitate ease of use, virtual animated arrows as well as physical arrows printed on the cube tell the user how to unfold the cube to move to the next scene. In early lab tests, children said they enjoyed the Magic Story Cube more than a picture book. “You need to take account of the fact that people are physical creatures, and these cubes are a very tangible, direct way of interacting with information,” Cheok says 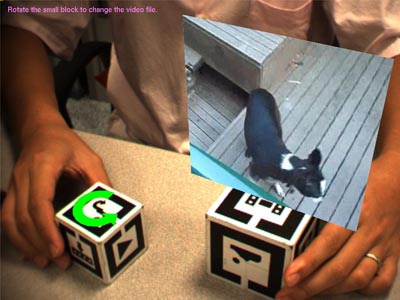 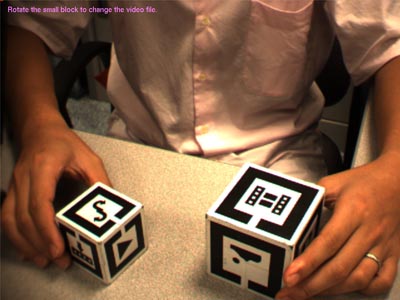 Their second attempt is to use the physical cubes as the essential parts of the computer games. Cubes are used as a dice and control tool of a monopoly-style board game, called “Jumanji Singapore”. The purpose of this game is for the users to have a virtual tour of the three-dimensional Singapore attractions while having fun with the board game competition. By wearing the head mounted display, the players can see three-dimensional Singapore map pop-up on the physical game board. They can also see their metaphors walking on the tracks of the virtual Singapore map after rolling the dice. The game tour starts and ends at the Changi airport. Along the game tracks, the players may stop at Singapore attractions like City Hall and Sentosa. Corresponding photos and videos are played back by manipulating the physical cube when the player gets to a specific spot. – MORE – The player can even fly into and navigate the virtual reality world by moving the control cube around. The player can also go shopping by using the cubes to put goods into the cart. “The whole point is to make traditional computer games tangible and allow face to face social interactions. Just like the traditional physical board games which we enjoy since our childhood,” Cheok says. 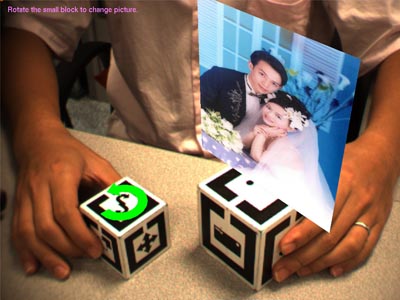 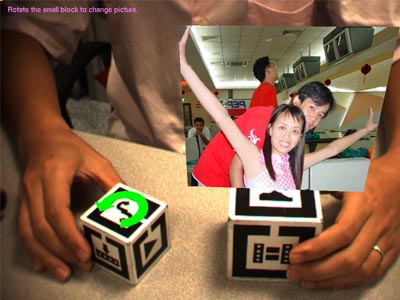 The new form of family entertainment system pioneered by Magic Cubes has received recognitions at various levels. Recently, Magic Cubes representing NUS has been awarded the top international prize at the Fifth National University Student Contest of Creativity-in-Action and Asian University Creativity Tour. In June 2004, Washington DC, Magic Cubes is the only accepted demo from Asia to be represented at the premiere ACM SIGCHI International Conference for Interaction Design & Children (IDC2004). Five US patents have been filed on the system and potential applications for education and family entertainment. The biggest Singaporean company, Creative Technology, has decided to cooperate with NUS to make products from these patents for family entertainment market. “This will definitely beloved by the grandparents for playing together with the kids,” says a senior officer of Creative Technology.
Videos
Magic Cube
Ball Racer
Board Game
Car Racing
Eye Cube
FPS