Permeation of technology into everyday life is made easier when the human experience it creates is made associable with day-to-day encounters. Human Pacman, based on the popular arcade Pacman from the 1980s, is a novel and entertaining game which seeks to bring about such association through stimulating multiple human senses and perception.It is a real-world-physical, social, and wide area mobile entertainment system that is built upon the concepts of ubiquitous computing, tangible human-computer interaction, and wide-area entertainment networks. Human Pacman is pioneering a new form of gaming that anchors on physicality, mobility, social interaction, and ubiquitous computing. 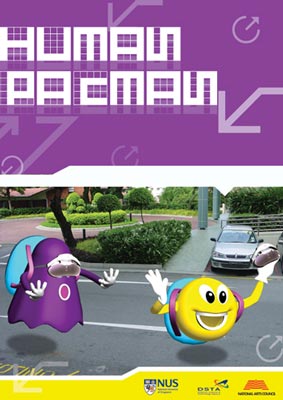 The game has several novel aspects: Firstly, the players immerse in role-playing of the characters Pacmen and Ghosts by physically enacting the roles. Players physically move around in a wide-area setting, performing tasks to reach their goals. Utilizing the computing power of wearable computers and the underlying network support, Human Pacman takes mobile gaming to a new level of sophistication by incorporating virtual fantasy and imaginative play activity elements, factors which propelled the popularity of computer games [1] (play the game today here) , with the implementation of Mixed Reality on the Head Mounted Displays (HMD). The players also experience seamless connections between real and virtual worlds as immersive first-person augmented reality view (with virtual cookies overlaying the real world) and full virtual reality view of our fantasy version of the game, Pacworld. 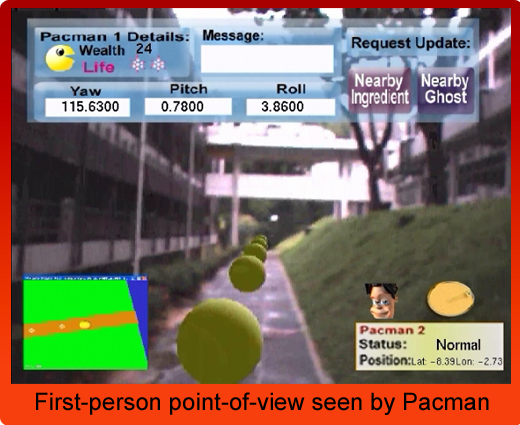 Secondly, Human Pacman also explores novel tangible aspects of human physical movement, senses and perception, both on the player’s environment and on the interaction with the digital world. For example to devour the virtual “enemy”, the player has to tap on the real physical enemy’s shoulder, which is an instinctive action to “catch” the “enemy”.By employing the philosophy of ubiquitous computing [2], we have implemented a system that embeds everyday physical objects with digital fantasy meanings. For example, players have to collect virtual ingredients by intuitively picking up physical sugar jars laid across the game area. These Bluetooth embedded sugar jars when picked up will automatically communicate with the wearable computer by adding the corresponding virtual ingredient to the inventory list of the player.

Thirdly, users enjoy unrestricted movement outdoor and indoor while maintaining their social contacts with each other. Players interact both face-to-face with other players when in proximity (physically) or indirectly via the wireless local area network (LAN).

Human Pacman has its roots in serious research about human’s interaction with their physical world. Human, as social creatures find physical interaction, touch, and humanto- human presence essential for the enjoyment of life [3] . In pre-computer age, games were designed and played out in the physical world with the use of real world properties, such as physical objects, our sense of space, and spatial relations. Nowadays computer games focus the user’s attention mainly on the computer screen or 2D/3D virtual environment, therefore constraining physical interactions. However, there seems to be a growing interest in physical gaming and entertainment. Commercial arcade games have recently seen a growing trend of games that require human physical movement as part of interaction. For example, dancing games such as Dance Dance Revolution and ParaParaParadise [4] as shown in Figure 2. 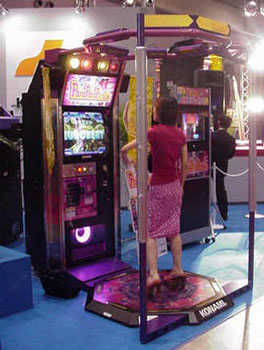 From “Ripleys Believe It or Not” 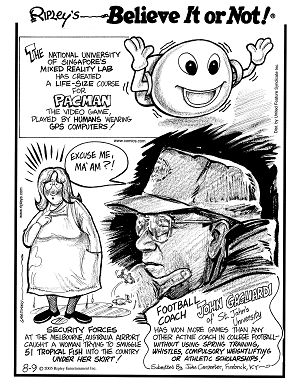 Q1: What sparked off this research?

Q2: Why did the team chose Pacman over many other arcade games?

A: In the 1980s Pacman was an international hit. It drove arcade gaming to a new level, wooing millions of players worldwide. We believe that Human Pacman is a new form of gaming, which has the potential of creating a new genre of gaming. Added to that, Pacman, being a game known worldwide, is a familiar gaming platform, making it easier to be picked up by gamers.

Q3: What was the budget for the invention?

A: Funding for the project came from the military. The amount is confidential.

Q4: What were the challenges faced and how were they overcame?

A: We met with a lot of challenges in both the hardware and software aspects. We had to source for and develop the appropriate devices for our system. A lot of problems were met while integrating the individual devices to make it all work together. For instance, some of the hardware devices simply were not working well together after the integration and we had to change them and find a substitute.

Q5: How many people were in the team? Who are they?

A: Dr Adrian Cheok and his team of 8 research staff and students.

Q6: How long did the research take?

A: One and a half years, since Nov 2002. The project is still ongoing as we strive to improve our system.

Q7: Could you please elaborated a little more on the part about tracking the players’ movements on the internet?

A: Who are these people linked up to the game and how can they help the players? We introduced a new element in Human Pacman – Helpers. Helpers are linked to the system through the Internet. This makes it possible for anyone in the world, not limited by her geographical location, to take part in the game. As Pacmen and Ghosts are physically role played by real people in a wide area setting, their view is often constrained to their immediate surroundings. Helpers on the other hand are able to “fly” into any part of the virtual world (which has a direct correspondence to the real world). They are able to advise the mobile players on the positions of all the cookies, treasures, and enemy mobile players in the game world. In addition, as Human Pacman involves multiple Pacmen and Ghosts, Helpers on each team can collaborate together to strategize against the opposing team. For example Helpers on the Ghost team could coordinate the movement of multiple Ghosts so as to corner a Pacman. Each mobile player carries a GPS system and a step counting device which estimates the position of the player in the real world. A main server maintains a real-time updated position of each mobile player and this information is broadcast to all Helpers in the game. The positions of these mobile players are updated graphically in the virtual world seen by the Helpers.

Q8: Where can the game be carried out?

A: The game can be carried out in large unsheltered areas with wireless LAN access. In our prototype system, we have also built an indoor version of the game. Players move around in custom built maze measuring 2.4 x 2.4 m. The mobile players are tracked using infrared technology and video tracking.

Q9: What is the maximum number of players?

A: In our lab prototype, we have built 4 wearable computers, making it possible for up to 8 players (4 mobile, 4 Helpers) to join in the game at the same time. The system is designed to be expandable to accommodate more players.

Q10: Will it be made commercial anywhere, especially in Singapore?

A: Creative (Singapore) has expressed interest in our system.

Q11: How many people have tried this so far?

A: Recently we showcased the Human Pacman system in a major conference in Vienna which saw about 2000 visitors to the conference (CHI 2004). Spectators were invited to try out the system for themselves. We also showed our system during the Ars Electronica Festival 2003 in Linz, Austria last September. Human Pacman was also shown to distinguished visiting professors to our lab in NUS.

Q12: What will be coming up next? More mixed-reality games?

A: Our lab is highly involved in creating novel and refreshing human computer interface which seeks to introduce new exciting ways to interact with computer. We are looking into more applications in the field of military, education, and entertainment.

Q13: In layman’s terms, how does Human Pac-Man work?

A: The game can take place both in indoor and outdoor area. Basically, players participate the game by donning a wearable computer (basically a notebook attached with many gadgets), headset and goggles before choosing to play the role one of the Pacmen or Ghosts. Through the headset and googles, players are able to see virtual objects such as cookies superimposed on real time video.

Pacman can collect the virtual cookies by walking through them, while Ghosts can “eat” the Pacmen by physically tapping the Pacmen’s back. However, Pacmen can collect power-pills which are Bluetooth-embedded boxes hidden in the game area to become Super Pacmen for a short period of time to “eat” the Ghosts in the similar fashion.

We also introduced the role of Helper, who can participate the game through the Internet. The movements of the Pacmen and Ghosts are tracked using sensors and they are linked back to a wireless Local Area Network which is connected to the Internet. Hence, the 3D-graphical version of the game can be rendered in real-time. Helpers can thus watch the game “live” and guide the Pacmen or Ghosts to reach their goal by text communication.

Q14: Do other participants play as ghosts? If so, can they communicate and coordinate trapping maneuvers?

A: Yes, as mentioned earlier, participants can play as Ghosts. However, text-based communication are limited between each Ghosts to their corresponding Helpers, but there is nothing to stop them from communicating verbally during the game (to promote the actual physical interaction between players). The same goes for the Pacmen.

Q15: What was your goal for the game?

Q16: Singapore’s military sponsored the project, correct? How might the technology benefit them?

A: The project has been sponsored by the Defence Science and Technology Agency of Singapore (DSTA) and the technology can be modified in many ways to suit the military needs. The technology can be developed as real time guidance and position information to the soldier in the battelefield. In addition the position and orientation of the soldiers is updated in real time through the internet, allowing commanders to have a visual real time representation of the battlefield, and provide real time commands to the soldiers in the midst of the battle.

Simulation training can be implemented whereby the soldier will have to deal with many virtual terrorists. The special power-pills can be modified as explosives to be defused. Things like guiding marker arrows or current status display that could have been difficult to be implemented before this can now be made possible through software implementation.

Q17: Do passersby suspect players might be crazy people? How does the public react to the spectacle?

A: We have showcased the Human Pacman to the public in several occasions, namely the CHI conference in 2004 in Vienna, the ACE2005 conference in Singapore and recently as part of the Singapore Science Centre Planet Games exhibition. We even showed it once to a group of teachers as part of an education seminar.

The public reactions were great; people are generally curious and intrigued by the fact that we have brought game of Pacman to life, literally. Most if not all the spectators were eager to try on our system. Judging from the responses, we don’t think the passersby would regard us as crazy people, hopefully 🙂

Q18: What other games might the technology be modified to support? Is a first-person shooter with the requisite weapons and power-ups feasible?

A: Yes, the basic game engine of this game can be easily modified to support many other games, including the first-person shooter and action games. Adding in weapons and power-ups is definitely feasible; it is just a matter of modifying some existing hardware or adding in some new hardware to suit the objectives of the game.

Q19: I understand that you’re now working on a commercial version that uses mobile phones. Can you tell me a bit about this?

A: The mobile phone game that we are working on is called “Catch the Flag” and it basically minimizes external hardware by replacing the wearable computer and headset with just the mobile phone. Players of opposing teams will roam around in the outdoor area to “catch the flag” (by physically picking up a bluetooth-embedded device) and collaborate with online players through the Internet via GPRS.