Free Network Visible Network is a project that combines different tools and processes to visualize, floating in the space, the interchanged information between users of a network. The people are able to experience in a new exciting way about how colorful virtual objects, representing the digital data, are flying around. These virtual objects will change their shape, size and color in relation with the different characteristics of the information that is circulating in the network. 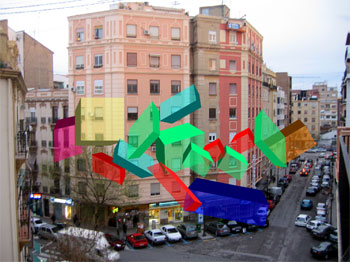 The main objective is to ask for the free access to the net and at the same time to make actions in the urban landscape as a way to create new meanings in the public domain. Our intention is to contribute to the re-definition and re-vitalization of the concept of public space through the creation of visible connectivity networks that mix the physical public space with the digital public space. With the territorial demarcation of internet free access areas and the virtual representation of the data that circulate through them, we want to evidence the perception of the city as a morphologic agent that is continuously being changed by the invisible connections of the communication technologies. 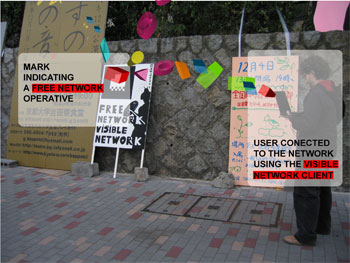 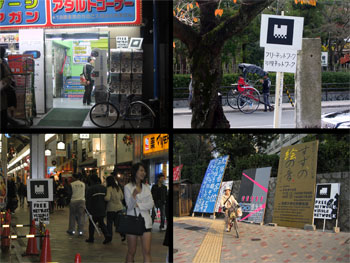 As our project takes place both in digital and physical public space, we establish direct relations between visual physical messages placed in the street and the virtual digital information that is floating in the air. Real messages and virtual information are connected by the main element of this project: a software named Visible Network Client that converts the data captured from a network into virtual objects, and superimposes them in real time to the real space. This software is mainly based on the Augmented Reality technology using MXRToolKit, combined with CarnivorePE, a software-art project of Radical Software Group that listens to all Internet traffic (email, web surfing, etc.) on a specific network. The union between these two technologies has made possible a new innovative system to visualize in Augmented Reality the metaphorical representation of the data that are continuously around us. 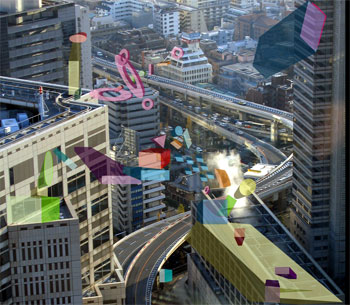 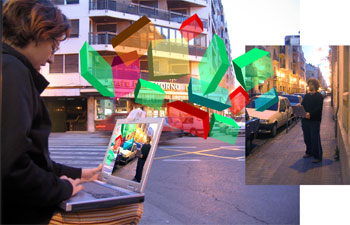