The cultural and generation gaps between the young and old have been growing in our modern age. This project introduces Age Invaders, a novel social physical game which allows the elderly to play harmoniously together with children in physical space. To design good games which are accessible for both children and the elderly can not only bridge the generational gap but also promote the elderly’s mental and physical vitality.

Age Invaders uses a fusion of technology and art to make a new form from the traditional arcade game space invader which is played in the physical game space. The game parameters are adjusted such that older players have more time to react to slow rockets fired by young opponents; conversely young players have to react much faster ones launched by the older opponents. Thus this game balanced physical ability across generation. 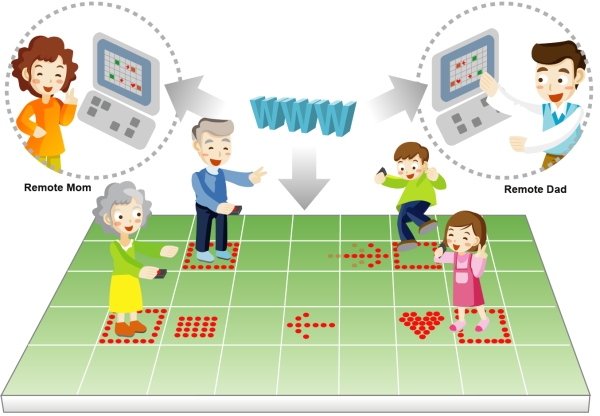 With the increase of technology, there is a huge gap between youth and elderly culture. Present technology does not often allow the facilitation of family entertainment. Most children greatly enjoy playing computer games from childhood and most of them do not like to take part in more elderly-style games such as chess games or fishing. Moreover, most of current computer and video games do not involve physical body movements and social interactions which are proven to be essential for the enjoyment of life. AI is a novel interactive intergeneration social-physical game that allows the elderly to play harmoniously together with children in physical space while parents can participate in the game play in real time through the internet 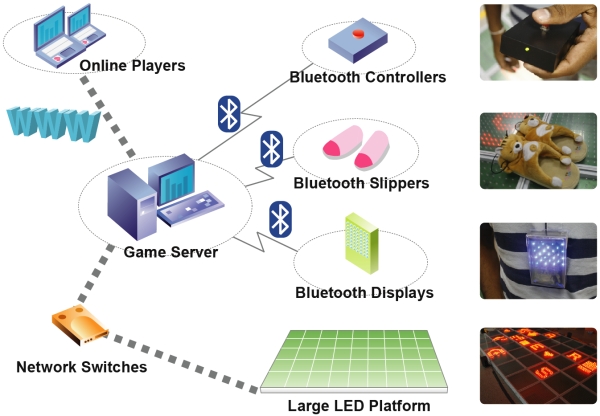 The Making of Age Invaders Version 2.0

The Age Invaders (AI) team began building a new platform from scratch on the 7th of August. Originally, the filming by Channel 5 was scheduled for the 28th of August. In order to meet the deadline, they spent the all their free time in the lab rushing to complete the hardware by the end of the 28th of August.

The schedule was very tight for the team. First the team has to rebuild the floor platform, custom fabrication and assembly of the PCBs, ordering of all the local and overseas components, building and test the body, shoe and gun PCBs, and full system test with involves the software and hardware testing. All of these have to be done in less than a month! Planning and time management are very crucial for getting the massive system up in time.

First the PCB designs were sent to Interhorizon for fabrications and assembly. In the mean time the team ordered the necessary components for assembly of the electronic boards. The RFID microreaders, RFID tags and EDTP readers are not available locally. Eng Tat, the team leader and Dr Cheok, director of the lab ran through the available online stores to purchase the components. Fortunate enough, using the UPS express service, the team managed to get all the components right on the doorstep within a week. The local components were ordered from Farnell and Sim Lim. The procedure for ordering the components from Farnell was very slow and complicated as no one if familiar with the purchase procedures. The make the matter worse, there is no lab officer in the lab handling the paper work for the purchases and Eng Tat has to double up for the admin work.

Concurrently, Eng Tat and Charith, a research intern in the lab, approached some contractors to build the floor platform. The new platform was designed to be simple to set up, lighter in total weights and good aesthetics. Different materials and dimensions were considered and the design was finalized and sent for manufacturing by a local contractor. The contractor has to rush the platform manufacturing to meet our deadline. 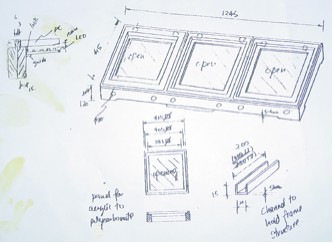 On the 14th August the two FYP, Kelvin and Mervyn joined the project. They came right in time to help assembling all the electronic boards. The team started out by soldering the EDTP boards which are required for each individual board to communicate with the game server via Ethernet. When that was done, the power jack cables were made so that power from the transformer could be delivered to each individual board.

The PCB vendor managed to deliver the electronic boards in batches. The first batch was returned in less than two weeks time, fully assembled! Ever wonder how they could do it so fast and at low cost? They fabricate the PCBs in China and assemble the components onto the PCBs in Indonesia, how efficient! Once the team received the boards, testing was carried out on each LED board to ensure that they were in proper working condition. The LEDs that were found to be faulty were replaced. In the middle of the week from the 14th of August to the 18th of August, the Age Invaders team faced a problem – the printed circuit board (PCB) manufacturers had made a mistake while manufacturing the controller boards shorting the power and ground plane through a via!  Lucky enough the AI team managed to spot the problem fast and they had to make the necessary correction to each PCB, 50 of them! By the end of the first week, the team had finished building the power cables, the transformers, the EDTP boards and the controller boards. Moreover, they had also made some changes to the shoe such that the players would use a shoe which we provide. Testing was also complete by the end of the first week.

In the second week (from the 21st of August to the 27th of August), the Age Invaders team went on to build the game components. These comprised of the LED display for each player, guns and the shoes. The team managed to buy many pairs of cute bunny slippers from a local shop to be retrofitted with RFID readers and Bluetooth device. The shoes were the most difficult to make because it involved the building of an antenna, inserting it into the shoe and sealing the shoe back. Furthermore, it was a really delicate process in inserting the antenna into the shoe. In the middle of the second week, part of the framework for the platform arrived. It was an improvement from the first version because it really looked a lot more elegant in design and it facilitated the setting up of the platform. It also could hide the wires from the eyes of the players. The programming of the RFID tags, microcontrollers for all the controller boards and game components were also done during this week.

By the 25th of August, the game components were complete and the remainder of the platform was delivered. Fortunately for the team, the filming by Channel 5 was postponed to the 1st of September. This gave the team more time to prepare for the filming. Nonetheless, the team is determined to get the platform to be fully working before the 28th.

On the 26th of August, the Age Invaders team experimented with the positioning of the tags to obtain the best arrangement for tags such that the shoes would be able to read the tags. The team worked through the whole of Saturday and at the end of the day, they managed to finish assembling the platform and give it its first power up!

At the start of the power up, the system behaved erratically. Not all the boards could be reached. Some boards could not receive its power properly. Moreover, one of the power jack cables experienced a short circuit. Fortunately, none of the hardware was damaged. The problem was fixed and the glass covers were added to the platform that night. Unfortunately, one of the shoes could not obtain any reception that night.

The next day, on the 27th of August, the team ran another test on the platform. The behavior of the platform was slowly stabilizing and it wasn’t as erratic as the first day. However, it still could not achieve a perfect power up. Slight modification had to be made with the connections before all the boards could communicate with the server. The team then installed the necessary programs and the game was ready and running. The problem with the faulty shoe was found – the connection between the antenna and the PCB was damaged. This was quickly rectified. During that afternoon, the team showed the fully working demo to Dr Cheok, and he was very pleased to find that the whole system is up and running perfectly! The whole team was very happy and felt the fruits of their hard work.

That’s not the end of work for the team; later that evening, the team realized that the body LED is not responding. The team was wondering why only the display A is lighting up upon receiving the correct data???

On the 28th of August, mystery of the display boards was discovered. It was due to a logical error made during the programming of the boards. The problem was rectified and everything was running well for the Age Invaders game. Unfortunately, there was a problem with the puzzle game Rush Hour – the horizontal arrangement of the vehicles appeared strange. Otherwise, the rest of the week was spent making the spare hardware for the Age Invaders team’s trip to Tokyo.

The cause of the problem for Rush Hour was discovered on the night of the 31st of August, just one day before the filming. The reason was that the position of the boards was reversed. As a result, the images appeared like a mirror image of what was shown on screen. The problem was corrected immediately. Moreover, the new Acer laptop which Dr Cheok bought on 26th of August was not running at its optimum speed. As a result, the refresh rate on the plasma TV for Rush Hour was extremely low. The team then decided to change to a desktop to run the program. About 12am that night, the team managed to get the full system Age Invaders version 2 ready for the filming by Channel 5 the next day!

Charith Fernando, a member of the Age Invaders project has published a technical documentation. Click here to view the documentation.