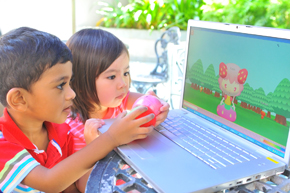 2010-04-22 – SINGAPORE – Children as young as seven years old are now able to experience a safe and fun online social environment with the world’s first interactive virtual and real world social robot,developed by a team led by A/Prof Adrian Cheok from the Mixed Reality Lab. Parents can feel safe and comfortable with their children using social networks because the friend making must be made only in the physical world through the children’s robot. An experience like no other, the robotic toy, named “Petimo”, responds to touch and movement. Its outer finish is an adorable plush toy and its small, round physical shape evokes a warm and tender feeling likened to carrying a baby animal. Petimo has already been selected by an international review panel as one of the best three submissions for the Como for Children (C4C) design competition held at The 8th International Conference on Interaction Design and Children (IDC 2009) during its debut in Europe.

Recently, “Petimo” – social networking robot for children, won the first prize in an international innovation competition in Milan Milan, Italy (Apr 22nd 2010). The prize is InventiON: concorso di idee per inventori, InventiON: competition of ideas for inventorshttp://www.innovationcircus.it/2009/. Petimo won the first prize in the ICT (information and communication technologies) track The competition is sponsored by the Municipality of Milan and the Chamber of Commerce, and is co-organized by a service company (Alintec) together with “Nova-Sole 24 ore”, (Italian financial times). The main sponsor of the competition is 3M.