By MICHAEL FITZPATRICK FOR MAILONLINE

The creators of Pepper the ’emotional robot’ have forbidden users from using it for sexual purposes, creating ‘sexy apps’ for it or reprogramming it to stalk people.

One thousand people paid £1,300 to buy the ‘companion bot’ within one minute of it going on sale in Japan this June, and then £250-a-month in rent.

Japan-based SoftBank included a clause in the ownership contract which said using the robot for ‘the purpose of sexual or indecent behavior’ breaks this agreement.

Disturbingly, computer pranksters have already reprogrammed the touchscreen hanging from its neck to give Pepper ‘virtual breasts’ which makes it shake its hips and moan when touched.

It has reignited the debate around so-called ‘sexbots’, with one roboticist telling MailOnline that machines which humans can realistically fall in love with are only ‘years away’.

The revolutionary Pepper is designed to live alongside humans. It reads emotions, gives its owners advice and makes small talk.

The super-advanced machine is so human-like that it can mimic human behaviour such as empathy, and even love.

Its creators SoftBank have urged customers ‘not to develop any sexy, obscene, or violent apps or actions for Pepper’.

In a further prohibitive clause Softbank simply inserts ‘no stalking’ into the contract.

Unfortunately the innocent Pepper has fallen into the hands of Japanese computer programmers who rewrote its software and created virtual breasts for the asexual robot.

The female developer who created Peppai – a play on the bot’s name and the Japanese word ‘oopai’ for breasts – said it was ‘for the purposes of testing sexual harassment’.

Some experts now say sex robots far more sensitive, attractive and ’emphatic’ than Pepper – which humans could seemingly fall in love with – are just a few years away.

Soon there will realistic humanoid robots with AI [artificial intelligence]’, said professor Adrian David Cheok, a roboticist at London City University, ‘Some of us will fall in love and have sex with robots.

Within a minute of going on sale last month, the first 1,000 Pepper robots sold out in Japan.

The robot that can read human emotions, comes with a set of comprehensive instructions and guidelines, preparing owners for life with him.

According to reviews, the four-foot-tall machine-on-wheels is charming, considerate, offers advice and will ‘prattle on and on’.

A Japanese journalist who spent half a day with the robot said that the most striking feature is the ‘absolutely ardent attention [Pepper] gives you.’

It told him he looked thin and even asked him about his day.

‘We are entering a completely new territory of ethics and legal issues. We haven’t worked out the ethics yet for robots.’

Professor Cheok suggests the time has come to decide whether robots have rights or not. He added: ‘For example – does sex with a robot, when you are married, mean you are cheating?’.

‘Sex robots seem to be a growing focus in the robotics industry and the models that they draw on – how they will look, what roles they would play – are very disturbing indeed,’ she told the BBC.

She believes that they reinforce traditional stereotypes of women and the view that a relationship need be nothing more than physical.

Dr Richardson added: ‘We think that the creation of such robots will contribute to detrimental relationships between men and women, adults and children, men and men and women and women.’

Professor Cheok agrees we need to draw some boundaries when it comes to robot ethics but he believes trying to stop humans falling in love with robots is ‘pointless’.

His research claims that 60 per cent of people could love a robot. To prove this theory, he is developing a kiss simulator called ‘Kissenger’ which is being adapted for use in some of the world’s most realistic robots.

He said: ‘So we can fall in love with robot and we will think it is alive because we have that empathy that is often extended to non-human things like animals and even teddy bears.

‘Whether its alive or just electronics, a robot will be “alive” for all intent and purposes because they emulate life.

Such rights couldn’t come sooner for robots in Japan, as it was revealed that Japanese children bullied a robot in public recently, while a Japanese man is being charged after attacking a Pepper robot in a Softbank shop. 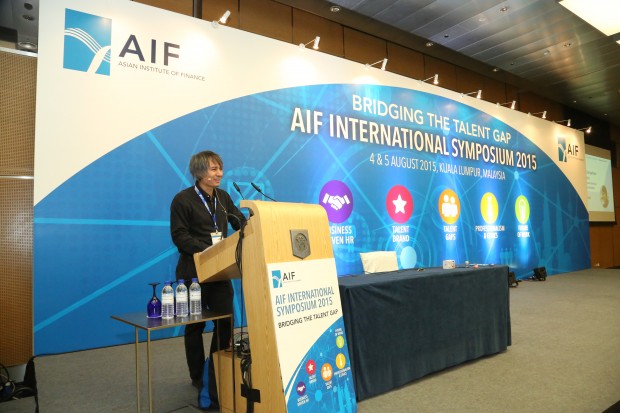 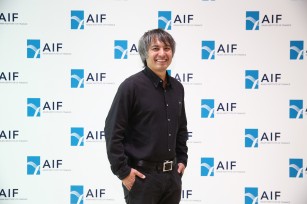 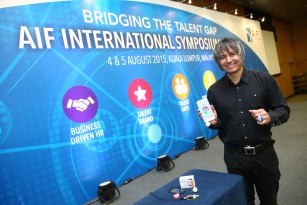 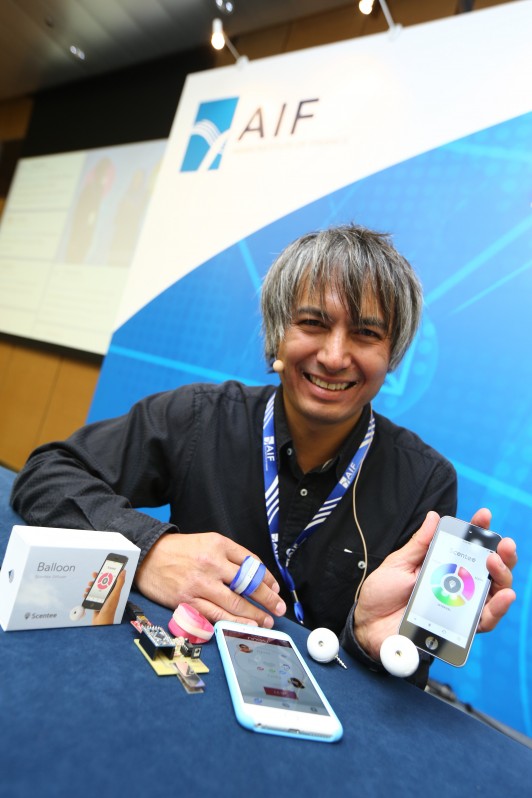 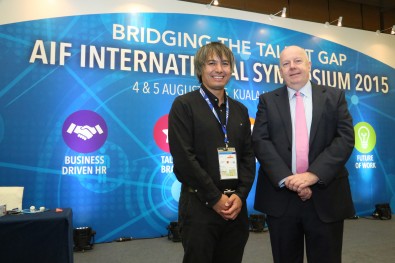 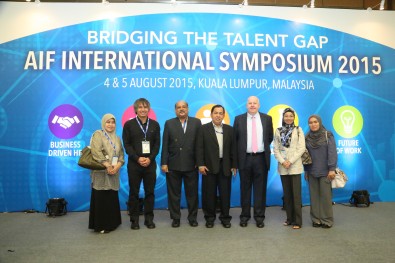 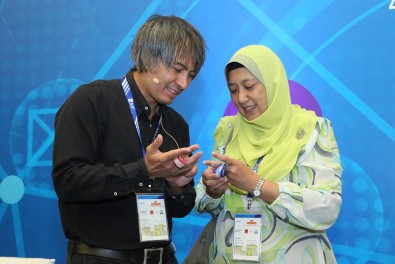 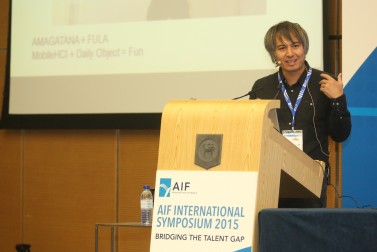 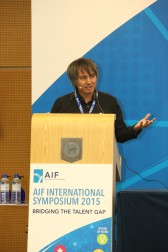 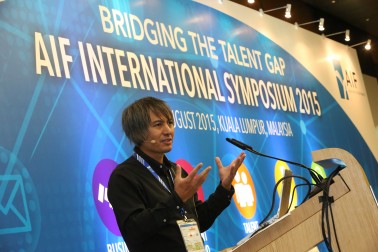 KUALA LUMPUR: In the world envisioned by Prof Adrian David Cheok, computing wouldn’t just be something you see or hear. It would be experienced with all the senses.

Cheok, a professor of pervasive computing at the City University London, has been researching ways to incorporate touch, sight, sound, smell and taste into computing for many years.

He calls it the world of “mixed reality”, where one will be able to use special pyjamas to give each other hugs even when miles apart.

Such pyjamas may seem trivial but it has a real-world application.

“Some autistic children can only be calmed by hugs,” Cheok said at the KL Converge! 2015 annual conference and exhibition held here from Thursday to Saturday.

The event was organised to advance the digital lifestyles of all Malaysians through converged communications. This year’s theme was Convergence and Digital Inclusion.

Cheok showed a pair of couple rings – when one user activates the ring, the other receives a “squeeze”.

Also in the works is a kissing robot that allows two users in different locations to “kiss” each other.

The robot, shaped like a rabbit, has lips with sensors to detect and measure the pressure of a kiss. When two users put their lips to the robots, they will transmit the “kiss” to each other in real time.

“You’re probably wondering why we made the robot look like a cute rabbit. We originally made it look like a human head and everyone said it looked and felt creepy,” said the Australian-born Cheok.

Research in pervasive computing doesn’t stop at that – scientists are also working on making glasses that can produce scent.

This can help improve the mood between two users by releasing pleasant scents as they chat, Cheok revealed.

He showed a demo with several funny scenarios where the product could be used – for instance, a poor student could make it release the aroma of a steak dinner to augment a plate of rice.

The device has already been used for marketing purposes in some countries, he added.

To introduce the sense of taste into the world of computing, scientists are working on a device that can be placed on the tongue – it will produce electricity to stimulate the taste receptors to have the user experience different flavours.

Cheok showed a demo at KL converge where he placed the gadget on a user’s tongue and made it produce a lemon-like flavour.

Cheok said the product could be used by children who could virtually cook a dish and then taste and smell it without having to use fire which could be dangerous.

“In the future, two friends can have dinner together even if they are worlds apart,” he quipped.